Dispute resolution in the Commission

The Commission deals with disputed claims for compensation including:

Note: the Commission will provide an interpreter if a worker requires, at no cost to the worker.

Structure of the Commission

The diagram below details the structure of the Commission: 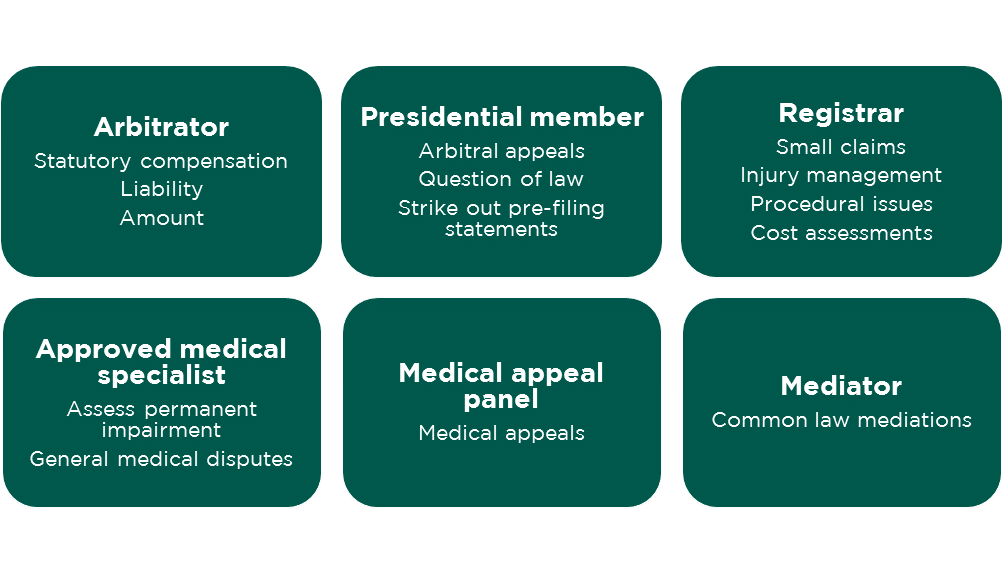 Presidential members hear appeals in relation to errors of fact, law or discretion against decisions made by Arbitrators. The President is responsible for determining novel or complex questions of law, and applications to strike out pre-filing statements in work injury damages matters.

Appeals against Presidential decisions are heard in the NSW Court of Appeal.

The Registrar manages the Commission’s operations. He/she is responsible for the general direction and management of Commission staff, Arbitrators, mediators and approved medical specialists.

The Registrar may also exercise all the functions of an Arbitrator.

An Arbitrator is an independent decision-maker who has a strong understanding of the workers compensation system. They have extensive experience in dispute resolution and are trained to conduct fair proceedings.

Arbitrators encourage all the parties to a dispute to come to an agreement. Where an agreement cannot be reached, the Arbitrator will issue a binding decision.

Disputes in the Commission

Unresolved workers compensation disputes can be brought to the Commission for resolution or determination.

Most other claims, such as weekly benefits compensation, medical expenses, or where liability is disputed in relation to a claim for permanent impairment, will be referred to an Arbitrator.

The process for resolving a dispute depends on the type of claim being disputed.

Most disputes regarding liability for payment of compensation are referred to an Arbitrator.

The following disputes may be referred to a delegate of the Registrar under the expedited assessment provisions:

The Registrar may refer claims for lump sum compensation, where the only issue in dispute is the degree of permanent impairment, directly to an approved medical specialist for medical assessment.

If a dispute is referred to an Arbitrator, it will involve a teleconference (see ‘Teleconference’ below).

If the dispute is not settled after the teleconference, a conciliation conference and/or arbitration hearing may take place.

The Commission has published a short video overview on what to expect when you attend the Commission.

Note: Due to the COVID-19 (Coronavirus) pandemic, changes have been made to the Workers Compensation Commission’s operations. Please refer to the Commission’s website for the latest information on operational arrangements.

The purpose of the teleconference (telephone conference) is:

The teleconference is intended to resolve some or all the issues in the dispute notice. Matters that have not been previously notified will only be dealt with if it is in the interest of justice to do so.

During the teleconference, the Arbitrator will:

The Arbitrator will help the parties to narrow the dispute by identifying:

If the issues are not resolved by agreement, the Arbitrator may:

The Commission has published a short video of what to expect at a teleconference with the Commission.

Determination on the papers

If the Arbitrator cannot bring the parties to agreement during the teleconference, they may decide that the dispute can be determined on the basis of the documents provided.

This is called a 'determination on the papers' and can happen after the dispute has been discussed with all parties and their views have been noted at the teleconference.

Where the dispute does not resolve at the teleconference, the Arbitrator will arrange a face-to-face meeting for the parties. This is called a conciliation.

The conciliation may include:

The Arbitrator will make a legally binding decision about the dispute.

A written decision called the ‘Certificate of determination’ will be sent to the parties approximately 21 days after the conciliation/arbitration conference.

The Commission has published a short video on what to expect when you attend a conciliation or arbitration hearing at the Commission.

The following disputes are expedited (fast-tracked) to a teleconference with a delegate of the Registrar:

If a dispute is not resolved at the teleconference, the delegate will issue a binding decision.

The Commission provides further information on expedited assessment pathways on its website.

A workplace injury management dispute is a dispute about the activities and procedures undertaken to achieve a timely and safe return to work.

Applications can be made to resolve disputes where:

Anyone involved in an injury management dispute (for example, worker, a worker's representative, an employer or an insurer) can lodge an application with the Commission. Applications can only be made after the worker has made a claim to the employer and/or insurer involved.

The Commission has published a short video on how the commission assists in settling workplace injury management disputes.

A dispute regarding a worker’s condition, fitness for employment and degree of permanent impairment may be resolved through the Commission's medical disputes pathway.

In some limited circumstances, an Arbitrator may be able to resolve the parties’ differences and make an award for permanent impairment. In most situations, the matter will be referred to an approved medical specialist for an assessment.

Note: For the purpose of section 322A of the Workplace Injury Management and Workers Compensation Act 1998 (1998 Act), a determination by an arbitrator is ‘one assessment’.

Medical assessments can include:

An approved medical specialist may examine the worker by video consultation as an alternative to a face-to-face consultation in limited circumstances. For example, assessment of a psychological injury where a worker is situated in a rural or remote location.

The Commission has published a short video on what to expect in the medical assessment process with the Commission.

Decisions made by the Commission may be appealed or reconsidered.

The Independent Legal Assistance and Review Service (ILARS) can pay a worker’s legal and associated costs of making a claim for compensation. This includes paying for legal costs, medical reports and reasonably necessary incidental expenses.