A PDF version of this report is available.

Why does SIRA publish insurer data?

As part of its regulatory oversight, SIRA monitors insurers’ performance through data-gathering and analysis. SIRA helps to hold insurers accountable by being transparent with this data, enabling scheme stakeholders and the wider public to have informed discussions about the performance of the industry.

Additionally, access to insurers’ data will help customers make meaningful comparisons between insurers when purchasing CTP insurance. People injured in motor accidents may also benefit from knowing what to expect from the insurer managing their claim.

The following evidence-based indicators measure insurer performance over the course of a claim journey:

The CTP Insurer Claims Experience and Customer Feedback Comparison results are published each quarter. Future publications will benefit as SIRA continues to improve and expand its data collection and reporting capability.

How many claims* did insurers accept?

Insurers accepted most claims from injured people and their families. Over 98% of claims were accepted in both 2018 and 2019. More detail on the rejected claims is provided on the following page.

Why were claims declined?

The most common reasons for claim denial included:

Reasons why claims* were declined

* Excludes claims which were declined because customers were covered by other scheme/insurer.

**Includes: injury non-existent, or not covered under the legislation.

**Includes: injury non-existent, or not covered under the legislation.

* Excludes claims which were declined because customers were covered by other scheme/insurer.
** Includes: injury non-existent, or not covered under the legislation.

How long did it take to receive treatment and care benefits?

Receiving treatment immediately after an accident is critical for making a full recovery. That is why insurers cover initial medical expenses for most people before they lodge a formal claim. This is when customers access treatment and care services after notifying the insurer, but before lodging a formal claim.

Time it take to receive treatment and care benefits (in weeks)

How quickly did insurers pay income support to customers after motor accidents?

Time if take to receive income support (in weeks)

Some insurers begin paying income support faster than others. Among the five insurers, Allianz had the highest proportion of customers who received income support within the first month of lodging a claim.

Overall, the rate of claims paid within the first month has improved significantly by 12% from 2018 to 2019.

What happened when customers disagreed with the insurer’s decision?

Customers sometimes also withdraw their application for an internal review.

Internal reviews by insurers and status (%)

The majority of internal reviews result in the original decision being upheld, although there was a decrease (-3%) in this ratio from 2018 to 2019.

What if customers still disagreed with the reviewed decision by the insurer?

If the customer continues to disagree with the insurer about their claim after the insurer internal review, customers may apply to the Dispute Resolution Service (DRS) for an independent determination of the dispute. Most applications require an internal review by the insurer prior to applying to DRS.

DRS can assist in resolving disputes in one of two ways:

Sometimes DRS applications can be:

SIRA closely monitors the compliments and complaints it receives about insurers. Compliments help identify best practice in how insurers manage claims, while complaints may highlight problems with insurers’ conduct which could require further investigation.

Customers can lodge complaints through any of SIRA’s channels. Non-complex complaints are handled by SIRA’s CTP Assist service and usually take less than two working days to close*. Complex complaints are referred to SIRA’s complaints handling experts and take on average 21 working days to close, depending on their complexity. Potential cases of insurer misconduct are escalated to SIRA’s Compliance, Enforcement and Investigation team for further investigation and possible regulatory action.

Customers who are unhappy with the outcome of SIRA’s review can resubmit their complaint for further consideration. If customers disagree with how SIRA handled their complaint, they can contact the Ombudsman of NSW for assistance.

Customers are encouraged to talk to their insurer in the first instance; insurers have their own complaints handling process. 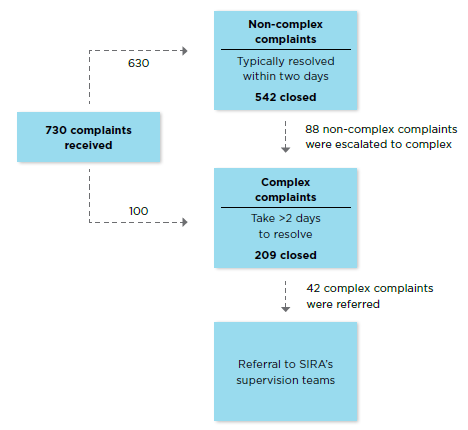 Any customers dissatisfied with SIRA’s handling of their complaint can contact the NSW Ombudsman.

* Where SIRA reviews a complaint and provides an outcome.

How many compliments and complaints about insurers did SIRA receive?

Who made the complaint

**The “Other” category are complaints predominantly by SIRA staff for calls to insurers which for various reasons take an unnecessary long
time to action.

What were the complaints about?

SIRA has continued to improve its strategies in detecting and responding to breaches of the Motor Accident legislation and guidelines. SIRA works closely with law enforcement agencies and other regulatory bodies to ensure appropriate strategies are in place to minimise risks to the CTP scheme. The CE&I team undertakes a risk-based approach to its investigations by considering the risk and harm to the scheme, claimants and policy holders and carries out appropriate regulatory enforcement action on a case by case basis.

During January to December 2019, 42 matters were referred to the CE&I team for investigation into alleged insurer breaches of their obligations under the legislation and guidelines. A total of 40 matters were finalised during this period, which includes matters received prior to January 2019.

Of those matters where an insurer breach was substantiated, the following issues were identified, and insurers subsequently notified:

The other matters finalised during this period were determined to be insurer practice issues of a minor nature and they have been referred to SIRA’s insurer supervision unit for education and continued monitoring.

About the data in this publication

Claims data is primarily sourced from the Universal Claims Database (UCD) which contains information on all claims received under the NSW Motor Accidents CTP scheme, which commenced on 1 December 2017, as provided by individual licensed insurers.

SIRA uses validated data for reporting purposes. Differences to insurers’ own systems can be caused by:

For more information about the statistics in this publication, contact MAIRstakeholder@sira.nsw.gov.au